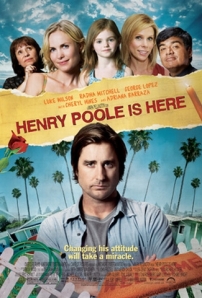 Rather than living his last days to the fullest after learning he only has six weeks left on earth, Henry Poole (Luke Wilson) cuts himself off from his fiancée and his family — and binges on Twinkies, pizza and liquor. But a fortuitous miracle and a clash with his eccentric, meddling neighbors derail Henry’s plans in director Mark Pellington’s witty black comedy.

I set this post up way back in January, when I had seen the film on the plane coming back from Israel.  I knew it was a spiritually potent film, but I had gotten stuck on what exactly I had wanted to say.  This film wrestles with a subject we all must face sooner or later: our mortality.  I am still relatively young and people my age generally do not think about death, imagining it to be far from now, but death can come upon thee anytime unheralded.

Henry Poole had to face his death with his life still in front of him.  Often it can be easier to face death if one has faith, since a belief that life continues in spiritual form after the death of the material body can be both comforting and a relief.  Henry did not have faith though.  If anything, his faith was lost through this test.  He returned to his childhood home, bemoaning his lowly state, drinking himself into an even lower state of depression, and treating his friends and family with wrath.  But we should not judge him

… for none knoweth what his own end shall be. How often hath a sinner attained, at the hour of death, to the essence of faith, and, quaffing the immortal draught, hath taken his flight unto the Concourse on high! And how often hath a devout believer, at the hour of his soul’s ascension, been so changed as to fall into the nethermost fire! ~ Bahá’u’lláh

Despite Henry Poole giving up on God, God did not give up on Henry Poole.  Soon a water stain appeared on the wall of his house which looked like Jesus to those who had eyes to see.  His neighbor, Esperanza (so aptly named Hope), a person of great faith soon brings all of her Catholic friends, as well as a priest to see this miracle.  Henry is annoyed and angered at both their naivete, ignorance, and willful foolishness.  It is just a stain and he insists on removing it.  Try as he may it will not scrub off.

Esperanza is patient with him though.  She knows he is suffering, and she too has suffered.  The love of her life had died, leaving her alone, and when Henry learns of this he becomes more patient with her too.  Esperanza through her actions is the embodiment of faith and of virtue, even if she is a bit nosy.

The virtues and attributes pertaining unto God are all evident and manifest, and have been mentioned and described in all the heavenly Books. Among them are trustworthiness, truthfulness, purity of heart while communing with God, forbearance, resignation to whatever the Almighty hath decreed, contentment with the things His Will hath provided, patience, nay, thankfulness in the midst of tribulation, and complete reliance, in all circumstances, upon Him. ~ Bahá’u’lláh

Henry’s faith is again tested when the mute, little girl from next door starts hanging around.  He begins to feel for her and her mother, and when she touches the wall she begins to talk again.  Her mother is over joyed, knowing that her daughters affliction had been a response to her father having left.  This is a side note, but I think very important.  Our actions have consequences and can effect the ones we love deeply.  This little girl was abandoned by her father, and because of that feared speaking.

Henry is able to open up and to love again, despite his mortality.  He finally opens up to her mother about his condition, and limited time left on earth.  Unfortunately the little girl overhears, and in grief returns to muteness.  This is too much for Henry to bear.  It was enough that he had to be (in his eyes) cursed with dying young, but then to hurt the people he cares about was too much.  In frustration, and anger, he destroys the wall, which represents to him false hope, lies, and deceit.

While anger and destruction are far from ideal, Henry was feeling powerless and not in control and by destroying the wall he was trying to take back control.  Henry could not accept the Will of God, and through fighting it created even more pain for himself.

And yet, is not the object of every Revelation to effect a transformation in the whole character of mankind, a transformation that shall manifest itself both outwardly and inwardly, that shall affect both its inner life and external conditions? For if the character of mankind be not changed, the futility of God’s universal Manifestations would be apparent. ~ Bahá’u’lláh

2 thoughts on “Henry Poole is Here — Despair vs. Faith”